“Debbins today acknowledged that he violated this country’s highest trust by passing sensitive national security information to the Russians,” said John C. Demers, Assistant Attorney General for National Security. “Debbins betrayed his oath, his country, and his Special Forces team members with the intent to harm the United States and help Russia. Debbins’s guilty plea represents another success in the Department’s continuing effort to counter the national security threat posed by our nation’s adversaries, including Russia.”

“Our country entrusted Debbins with the responsibility and training to protect it from its adversaries,” said G. Zachary Terwilliger, U.S. Attorney for the Eastern District of Virginia. “Debbins betrayed that trust and betrayed his fellow service members by conspiring to provide national defense information to Russian intelligence operatives. I would like to commend our investigative partners for their steadfast and dogged dedication to bringing Debbins to justice and holding him accountable for his crimes.”

From 1998 to 2005, Debbins served on active duty as an officer in the U.S. Army, serving in chemical units before being selected for the U.S. Army Special Forces. The Russian intelligence agents encouraged him to join and pursue a career in the Special Forces, which he did, where he served at the rank of Captain.

“Debbins betrayed this nation and his fellow serviceman, putting Americans and our national security at risk by providing national defense information to Russia’s Intelligence Service,” said Steven M. D’Antuono, Assistant Director in Charge of the FBI Washington Field Office. “Despite being entrusted to protect his colleagues and U.S. national security, he chose to abuse this trust by knowingly providing classified information to one of our most aggressive adversaries. Today’s plea is an example of the zealous pursuit of justice that the FBI and our partners stand for and work tirelessly to achieve every day.”

“President Kennedy called the Green Berets ‘a symbol of excellence, a badge of courage, a mark of distinction.’ Mr. Debbins’ actions were a symbol of betrayal, a badge of cowardice, and a mark of treachery,” said Alan E. Kohler, Jr., Assistant Director of the FBI’s Counterintelligence Division. “He pledged his allegiance to Russia, and in doing so, sold-out his country and fellow Green Berets. This case should serve as a reminder that the FBI and its investigative partners will stop at nothing to hold an individual accountable for their actions.”

Debbins is scheduled to be sentenced on Feb. 26, 2021. He faces a maximum penalty of life in prison. Actual sentences for federal crimes are typically less than the maximum penalties. A federal district court judge will determine any sentence after taking into account the U.S. Sentencing Guidelines and other statutory factors.

President Donald Trump announced Tuesday on Twitter that he had fired Chris Krebs, director of the Cybersecurity and Infrastructure Security Agency, for a recent statement Krebs made regarding election security.

Krebs has consistently debunked allegations of voter fraud over the past week, tweeting, “On allegations that election systems were manipulated, 59 election security experts all agree, ‘in every case of which we are aware, these claims either have been unsubstantiated or are technically incoherent.’ “

On Tuesday, Trump tweeted that Krebs’s statements were “highly inaccurate,” alleging “massive improprieties and fraud.” Trump’s tweet was labeled as “disputed” by Twitter.

“Therefore, effective immediately, Chris Krebs has been terminated as Director of the Cybersecurity and Infrastructure Security Agency,” he tweeted.

Following to removal of US Defense Secretary Mark Esper, the Pentagon and acting Defense Secretary Christopher Miller have announced a withdrawal of thousands of troops from Afghanistan and Iraq, leaving around 2,500 residual personnel in both countries.

US President Donald Trump is reportedly looking to withdraw nearly all US military personnel from Somalia as part of a global pullout that is slated to see a decline in American forces in Afghanistan and a reportedly smaller withdrawal from Iraq.

Citing anonymous US officials, Reuters reported Tuesday that Miller, who previously served as director of the National Counterterrorism Center, is seeking to carry out a near-total withdrawal of the roughly 700 US troops in Somalia, who have been stationed in the East African country to combat local al-Shabaab militants.

The US has recently conducted pullouts in the Somali cities of Bossaso and Galkayo. Somali Colonel Ahmed Abdullahi Sheikh told the outlet that further withdrawals by the US would undermine trust and provide militants with an upper hand.

“It would create a vacuum. The Somali security forces have good morale because of the US troops â€¦ there’s the possibility of air support if they are attacked, they can have medevacs,” he declared.

However, no finalized decisions have been made, and no orders have been delivered to US military leadership regarding Somalia, according to the US officials who spoke to Reuters.

“This is consistent with our established plan and strategic objectives,” he argued, hours after informing members of the US Congress of the decision.

Many US officials and allies have expressed concern over the now-confirmed pullout of troops from Afghanistan.

“The price for leaving too soon or in an uncoordinated way could be very high. Afghanistan risks becoming once again a platform for international terrorists to plan and organize attacks on our homelands,” NATO Secretary-General Jens Stoltenberg said in a statement to CNN on Tuesday.

“And [Daesh] could rebuild in Afghanistan the terror caliphate it lost in Syria and Iraq.”

The US President tweeted in December that Americans should expect to see the “small remaining number of our BRAVE Men and Women serving in Afghanistan home by Christmas!”

However, with no finalization in the Afghan peace process, the region is already facing a possible “humanitarian disaster” linked to government and Taliban clashes, according to UN High Commissioner for Refugees Filippo Grandi.

Nov 17, 2020
The Hamas terror group is fuming over the Palestinian Authority’s decision to restore ties with the Israeli government.

After a senior Palestinian official announced Tuesday that the Palestinian Authority (PA) is restoring ties with Israel, the Hamas terror group in Gaza denounced the move as a betrayal of “national values and principles.”

The PA’s announcement means it will again engage in security coordination with Israel after claiming it ended all cooperation six months ago.

Even after the PA said it cut off coordination with Israel, sources within each sides’ security establishment cast doubt on whether all cooperation had actually been severed.

In Hamas’ reaction to the PA announcement on Tuesday, quoted by the Walla news site, the brutal terror group trotted out all of its classic anti-Israel tropes, referring to the “occupation” and “annexation” and slamming any “normalization” with the Jewish state.

On Tuesday, senior Palestinian official Hussein al-Sheikh, a top aide to President Mahmoud Abbas, tweeted “the relationship with Israel will return to how it was” following “official written and oral letters” from Israel, the Associated Press reported.

Abbas announced a cessation in coordination in response to Israel’s plans to officially extend sovereignty over Jewish communities in Judea and Samaria.

US government account
Honored to meet with His All-Holiness, Ecumenical Patriarch Bartholomew I, and to visit the Patriarchal Church of St. George today. As leader of the Orthodox world, the Ecumenical Patriarchate is a key partner as we continue to champion religious freedom around the globe. 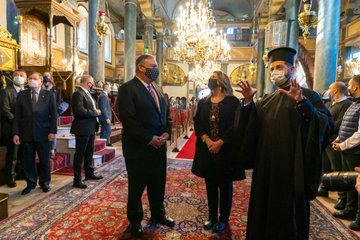 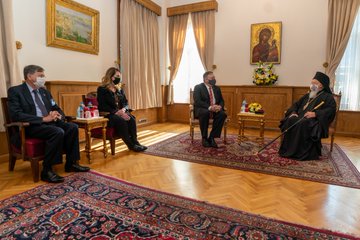 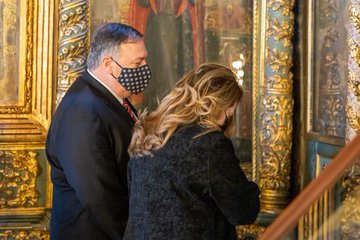 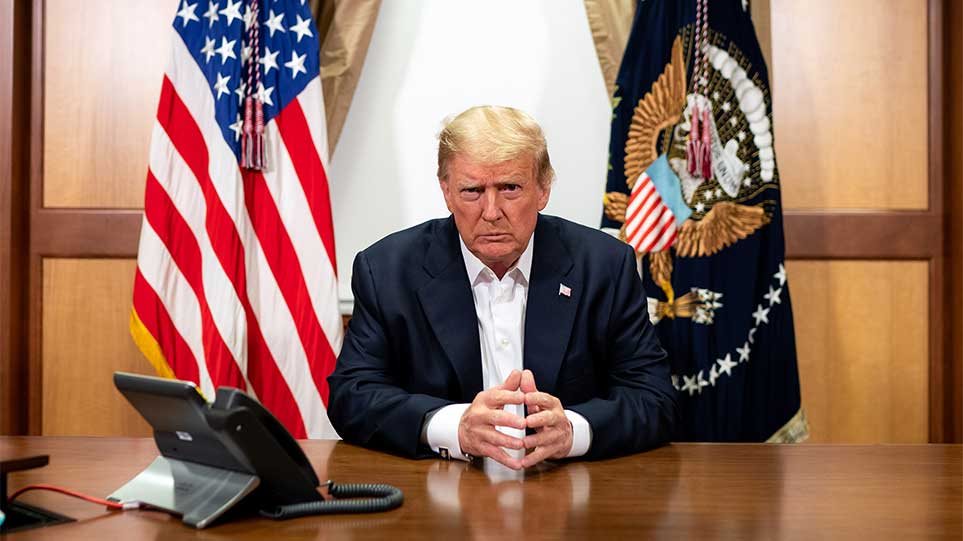 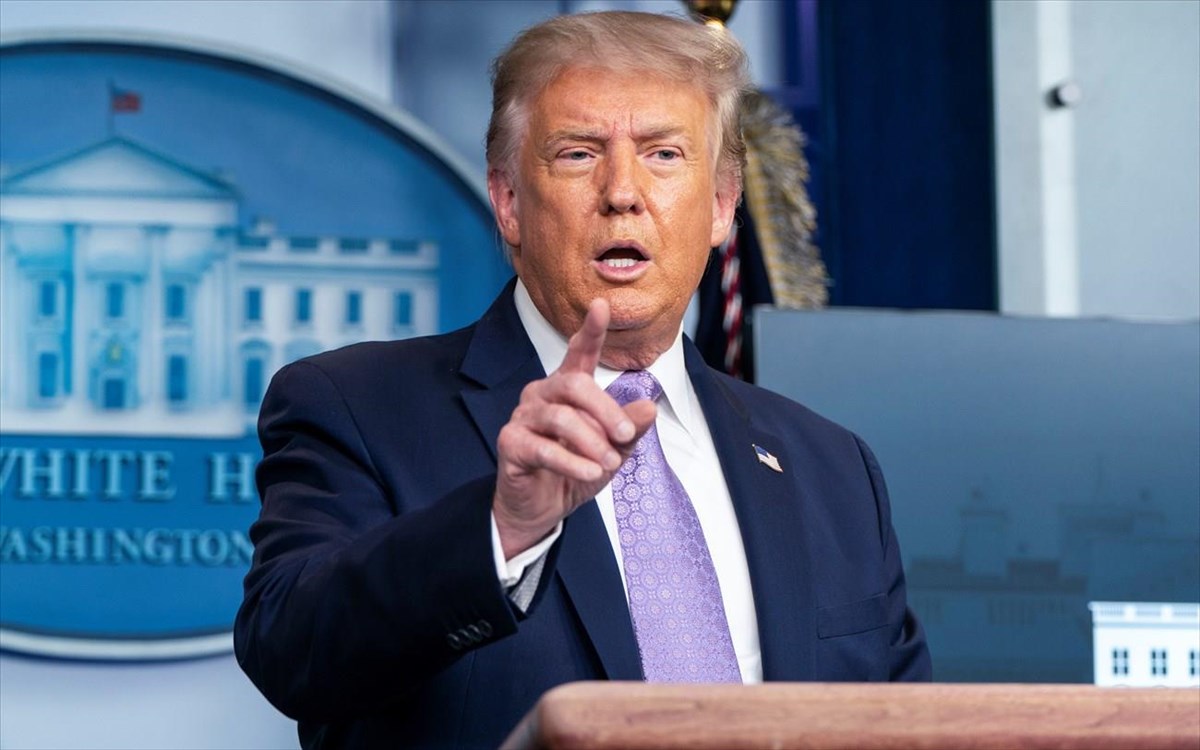 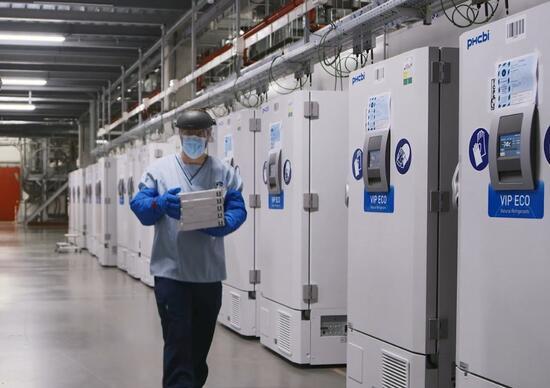 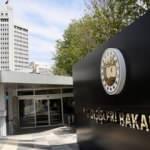