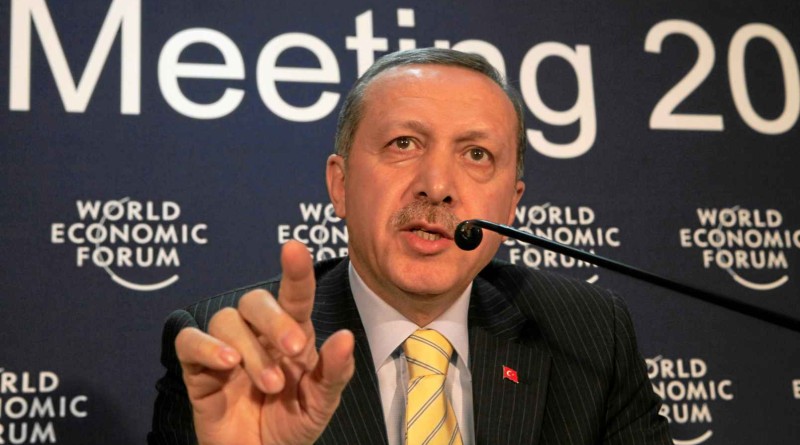 Erdogan thinks he can blackmail Trump.

Turkish autocrat Recep Tayyip Erdogan is coming to Washington, DC, on May 16 loaded for bear.

He has an ambitious agenda and apparently feels he can achieve it all because he holds “trump” cards against the President of the United States.

Erdogan and his proxies have publicly said they want to convince the United States to jettison its budding alliance with the Syrian Democratic Union (PYD) and its armed wing, the People’s Protection Units (YPG), the Kurdish group that has become the tip of the spear in the fight against ISIS in Syria.

On this point, they will encounter resistance from the U.S. military, which sent a U.S. Marines Stryker group into northern Syria recently to serve as a buffer between Turkish and Kurdish forces after the Turkish air force conducted air strikes that killed twenty of the U.S.-backed Kurdish fighters.

Erdogan can be expected once again to trot out “evidence” that the Syrian Kurds and their Iranian allies, known as PJAK, are puppets of the PKK, the Kurdish group that waged war against the Turkish state for 15 years before entering into negotiations in 1999.

Both the United States and the European Union consider the PKK a terrorist organization, while recognizing that the Syrian and Iranian Kurds have separate command structures. Neither the YPG nor PJAK has joined the PKK in military operations inside Turkey.

But Erdogan has more on his agenda than Kurds and Syria. He is also seeking the extradition to Turkey of former ally-turned-arch political rival, Islamist cleric Fetullah Gulen, who fled Turkey for Pennsylvania in 1999.

Erdogan accuses Gulen of having masterminded the failed July 2016 coup against him, a claim the cleric denies. Critics of the Turkish president who are not allied with Gulen have questioned the authenticity of the coup, citing the professionalism of previous coups by the Turkish military and the amateur nature of last year’s attempt.

This won’t be the first time Erdogan has demanded that the U.S. extradite Gulen, whom he has taken to calling the head of “FETO” – the Fethullah Terrorist Organization.

Since the botched coup, Erdogan and his strongmen have conducted sweeping purges of the military, police, criminal justice and even education system, firing more than 120,000 suspected Gulen supporters and arresting more than 40,000. Erdogan called the failed coup a “gift from God.” Indeed.

Many of those arrested have been accused of being “terrorists” because they were caught in possession of U.S. one dollar bills, which Erdogan claims Gulen supporters use as a “secret signal” to identify themselves to one other.

Among these victims was the 19-year old son of a U.S.-based academic, Dr. Ahmet Yayla, who until 2014 served as police chief in Sanliurfa, a city along the Syrian border, where he was ordered to provide security to wounded ISIS terrorists so they could receive treatment in Turkish hospitals.

Since moving to the United States in 2015, Dr. Yayla, who says he has no affiliation with Gulen or the Gulenist movement, has written scathing exposes of how Erdogan helped funnel arms to ISIS and “deliberately turned a blind eye to the Islamic State’s use of his nation as a staging ground for attacks.” Dr. Yayla has also accused Erdogan and his family of benefitting from the sale of ISIS oil, citing hacked emails from the account of Erdogan’s son-in-law, Berat Albayrak, who is Turkey’s Minister of energy and natural resources. He believes his son was arrested in an attempt to silence him.

The third item on Erdogan’s agenda is by far the most troubling, and could pose a real challenge to President Trump.

He wants the President to order the U.S. Attorney in the Southern District of New York to drop charges against a Turkish-Iranian national, Reza Zarrab, who is accused of a vast money-laundering scheme to violate U.S. sanctions against Iran that allegedly involved huge bribes paid to top Turkish officials, including members of Erdogan’s own family.

Zarrab, also known as Riza Sarraf, was arrested while attempting to take his family to Disneyworld in March 2016. Despite offers to post a $10 million bond and to stay under house arrest in a luxury apartment in Manhattan, Zarrab remains in custody. His jury trial is scheduled to begin on August 16.

According to federal prosecutors, Zarrab offered his money-laundering services to Iran’s Supreme Leader Ayatollah Khamenei in a 2011 letter, and worked in tandem with Babak Zanjani, who had deep ties to Iran’s Revolutionary Guards Corps.

The United States Treasury identified Zanjani and his Sorinet Group in 2013 as the principle operator of a vast money-laundering scheme that helped Iran to sell upwards of $200 billion of oil in violation of international sanctions. Zarrab and his Turkish political partners, reportedly including Erdogan himself, were instrumental in laundering the proceeds back to Iran through U.S. and Turkish banks.

Prosecutors in Turkey arrested Zarrab on December 17, 2013, on corruption charges involving bribes to four members of then Prime Minister Erdogan’s cabinet, including his son-in-law, Berat Albayrak.

Erdogan struck back by firing the prosecutors, police investigators and judges involved in the probe, accusing them of plotting against him on behalf of Fethullah Gulen.

Two months later, five audio tapes of alleged phone conversations between Erdogan and his son, Bilal, on the day of Zarrab’s arrest, show why Erdogan panicked. In the tapes, posted on line, Erdogan can be heard instructing his son to remove $1 billion in cash from his home and the homes of family members before the police arrived.

That money reportedly had been paid to Erdogan and his family by Zarrab in exchange for allowing Zarrab to launder Iranian oil money through Turkish banks and to buy gold he subsequently shipped to Iran via the United Arab Emirates. Erdogan has not denied that he and his son are speaking on the tapes, but claims they have been doctored.

For a few months, it was touch and go for Erdogan, with many commentators suggesting the corruption scandal would sweep him from office. But as his purges expanded and he closed down all opposition media, he managed instead to consolidate power. By March 2014, he ordered Zarrab released from jail and even commended him as a prominent job-creator and philanthropist. (Among Zarrab’s charitable gifts was a $4.65 million contribution to a charity run by Erdogan’s wife, Emine, according to U.S. court filings.)

President Erdogan’s close ties to the Iranian regime have often been downplayed in the media and among Middle East “experts,” just as they have downplayed his ties to ISIS.

But Reza Zarrab knows the truth. Erdogan desperately wants to keep him from appearing at a public trial in New York, where prosecutors could very well convince him to tell the truth about the payoffs to Erdogan and the money-laundering scheme in exchange for a reduction of the 75-year prison term they are currently suggesting.

Here’s where it gets personal for President Trump.

The two traveled to Turkey to confer with President Erdogan about the case and spoke with senior U.S. officials as well, arguing that Zarrab was a non-violent offender who deserved clemency.

They attempted to keep their involvement in the case confidential until Assistant U.S. Attorney Michael Lockard outed them in public court filings, accusing the two of seeking to “muddy the waters” by downplaying the gravity of the charges against their client.

“The entities that benefited from this alleged scheme include the Islamic Revolutionary Guard Corps and agents or affiliates of that entity, Iranian banks that have been sanctioned for their role in providing financing for Iran’s nuclear programs, and Iranian commercial airlines,” Lockard said.

Giuliani’s lawfirm, Greenberg Traurig, is a registered lobbyist for the government of Turkey, giving rise to complaints from other members of Zarrab’s legal team that he might represent Turkey’s interests before their client’s. Mukasey’s lawfirm, Debevoise & Plimpton, is representing Iranian government-related defendants in a separate civil forfeiture case being prosecuted by Lockard, while Mukasey’s son has been mentioned as a possible replacement for Preet Bharara, who was fired by Attorney General Jeff Sessions last month.

Tayyip Erdogan is not known for his subtlety. In the days following the July 2016 attempted coup, he ordered Interior Ministry troops to surround the NATO airbase at Incirlik, which the U.S. Air Force uses for operations against ISIS, reportedly in retaliation for what he claimed was U.S. involvement in the coup.

He will surely remind the U.S. president that Turkey still controls Incirlik. He may also suggest that should President Trump not agree to his demands, the Turkish government might penalize the Trump Organization, which is building luxury residential and office towers in the heart of Istanbul.

While Erdogan might be tempted by this crude attempt at blackmail, he has far more to lose than Donald Trump.

President Trump has consistently said that he puts the national interest before his personal or business interests. Standing up to Erdogan, even taking a hit from Erdogan’s thugs, would only enhance his reputation with American voters, whereas Reza Zarrab’s revelations could sink Erdogan for good.

As for Incirlik, many have suggested already that the United States should build replacement air bases around the region, starting in Iraqi Kurdistan. If Turkey does not take their NATO commitments seriously, then we should reconsider Turkey’s membership in NATO.