1. Turkish daily close to Erdogan calls for ‘army of Islam’ to fight Israel

A Turkish newspaper with close ties to President Recep Tayyip Erdoğan called for the formation of a joint Islamic army to fight Israel.

On Dec. 12, 2017, ahead of the summit of the Organization of Islamic Cooperation (OIC) in Istanbul, the Turkish daily Yeni Şafak, which is close to President Recep Tayyip Erdoğan and his ruling AKP party, published an article titled “A Call for Urgent Action,” which also appeared on the paper’s website under the title “What If an Army of Islam Was Formed Against Israel?”

The article called on the 57 member states of the OIC to form a joint “Army of Islam” to besiege and attack the state of Israel. It notes that such a joint army will greatly exceed the Israeli army in manpower, equipment and budget, and presents statistics to prove this.

It also advocates establishing joint bases for the army’s ground, air and naval forces that will arrive from all over the Muslim world to besiege Israel, while noting that Pakistan, as the only nuclear country, has “a special status” among the OIC countries. An interactive map provides information on military forces stationed in various locations and the role they can play in the potential joint Muslim attack on Israel.

Show me the money

The main points of the article are taken from the website of the Turkish SADAT International Defense and Consulting Company, which provides consultancy on defense and warfare, both conventional and unconventional, and on military organization, training and gear. 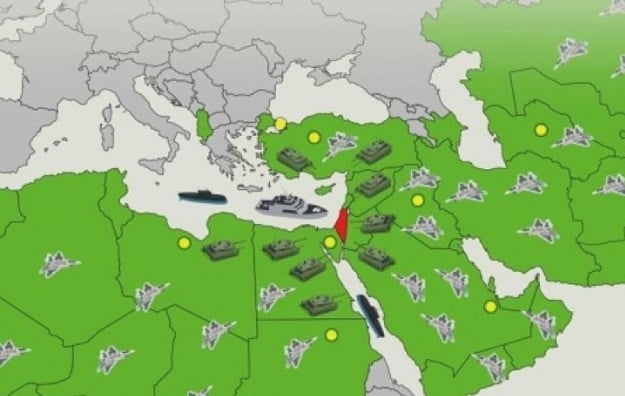 The company has an agenda of promoting pan-Islamic military cooperation. According to its mission statement, it seeks “to establish defense collaboration and defense industry cooperation among Islamic countries, to help the Islamic world take its rightful place among the superpowers by providing… strategic consultancy and training services to the militaries and homeland security forces of Islamic countries”.

According to Israeli security sources, the SADAT company is involved in aiding Hamas, and seeks to assist – with funds and military gear – the creation of a “Palestine Army” to fight Israel.

The SADAT company was founded by Erdoğan’s senior advisor on military affairs, retired general Adnan Tanrıverdi, and is chaired by his son, Melih Tanrıverdi. Adnan Tanrıverdi (b. 1944) served in the Turkish army’s Artillery Corps and headed the Home Front Command in northern Cyprus. He is an expert on assymetric warfare, and was dismissed from the Turkish military in 1996 for his Islamists leanings. A former Turkish army officer, Ahmet Yavuz, described him as “an enemy of Atatürk” and stated that his dismissal from the army was not surprising.

The Yeni Şafak article is based on a PDF booklet featuring a number of articles by Tanrıverdi, as well as other materials, that appeared on the homepage of SADAT’s website and has since been removed. Some of the articles are virulently anti-Israel and promote the goal of arming the Palestinians and forming an Army of Islam to eliminate Israel.

Recently, Israel became aware of Tanrıverdi’s activities after it arrested a Turkish academic, Cemil Tekeli, on suspicion of aiding Hamas terrorists in Turkey. According to the Israeli paper Makor Rishon, Tekeli, who has since been deported to Turkey, is a close associate of Adnan Tanrıverdi.

‘What If An Army Of Islam Was Formed Against Israel?’

The following are excerpts from the Yeni Şafak article:

“If the OIC member states unite and form a joint military force, it will be the largest army in the world. These countries’ total population is 1,674,526,931. The number of soldiers in active service in these countries is at least 5,206,100. Their [overall] military defense budget, of $174,728,420, is also worthy of emphasis.

“As for Israel, it is significantly inferior. The population of this country, which attempted to occupy Jerusalem while surrounded by Muslim states, is 8,049,314. Note that the population of Istanbul alone exceeds 14 million. The number of soldiers in active service in the [Israeli] occupation forces is 160,000, and [Israel’s] defense budget is approximately $15,600,000,000.

“Among the decisions that can be taken at the OIC [summit] is to form a ‘Jerusalem Task Group.’ In this framework, military steps are likely to be taken. The [Muslim] armies, ranging from Africa to Asia, surpass the Israeli [army in might]. So if an Islamic army is formed, Israel will be under a siege.

“In a possible military operation, the first step is expected to involve 250,000 soldiers, and the establishment of joint land, air and naval bases for use in the short term. 500 tanks and armored vehicles, 100 war planes, 500 attack helicopters and 50 warships and submarines can be mobilized.”

“The war planes that will be dispatched to the region from greater distances will be stationed in airbases [closer to Israel]. Israel will most likely to be besieged by the naval fleets that will be sent to the Mediterranean and the Red Sea.

“The military capability of the OIC member states is considerable. These armies have the necessary equipment to carry out a military operation on land, sea and air.

“Turkey will serve as an important headquarters during the operation, due to its land, air and naval infrastructures. The Turkish army, which carried out ‘Operation Euphrates Shield’ [in Syria in 2017] with great success, is now ranked the world’s seventh strongest army, and the second largest army among the NATO powers. Turkey has approximately 4,000 tanks and 1,000 war planes and other aircraft. Its navy made significant progress during the last years, with 194 vessels at its disposal.

“As the only country which possesses nuclear weapons, Pakistan has an important status among the 57 Muslim [OIC] countries… Those who believe that they are the owners of Jerusalem today will not find a single tree to hide behind tomorrow.

“In a statement, Malaysian Defense Minister [Hishammuddin] Hussein described Trump’s recognition [of Jerusalem as Israel’s capital] as a blow to Muslims, and added: ‘The Malaysian armed forces are ready to fulfill their duty regarding Jerusalem.’

“In recent years, Turkey has launched a series of collaborations with [OIC] member states. The joint military drill with our Iraqi neighbors conveyed a clear message to the terrorists, and Turkey is [also] engaging in new collaborations with Qatar, Somalia and other Gulf and African countries. In this context it should be underlined that Turkey is taking steps to realize the model of the ‘Army of Islam,’ forging alliances with many Muslim countries to increase its military mobility”.

By: United with Israel Staff

A bill that would slash funding to the Palestinian Authority (PA) according to the sum the PA pays out to convicted terrorists and their families was approved in its first reading by the Knesset plenum on Monday.

Fifty-two lawmakers supported the bill, introduced by Member of Knesset (MK) Elazar Stern, which would deduct payments paid out by the PA to Palestinian prisoners and their relatives from tax revenues Israel transfers annually to the PA. Only 10 lawmakers voted against the legislation.

Israel collects an estimated $2.1 billion in tax revenues for the PA, in accordance with the 1994 Paris Protocol, which governs economic relations with the PA, including import taxes on goods passing through Israel to the Palestinians.

During the discussion on the bill, MK Avi Dichter said that the Palestinian Authority (PA) has increased its payments to terrorists and their families by nearly $56 million in 2018.

Avi Dichter, former Shin Bet (Israel’s Security Agency) head and current Head of the Defense and Foreign Affairs Committee, pointed out that PA head Mahmoud Abbas authorized the 2018 PA budget on Sunday, and that there is a PA law that allocates 7 percent of each budget to paying terrorists, or to their families, if they are killed during the attack.(Αυτό Κε Πάϊατ, διάβασέ το και πάλι και πες το στους… “ΔΗΜΟΚΡΑΤΙΚΟΥΣ” φίλους σου στις Η.Π.Α.)!..

Dichter explained that the increase “means that the PA will employ more terrorists as PA workers. Except that the terrorists who work for the PA have a special quality – they are employed both as dead and living terrorists.”

Murderers, like the two who killed five of the Fogel family members in 2011, “are heroes to the PA. This is not a whim. It’s in the PA’s constitution,” Dichter added, according to the Jerusalem Post.

According to Israel’s Defense Ministry, the PA in 2017 paid NIS 687 million to the so-called “martyrs’ families fund” and NIS 550 million to the Palestinian Prisoners’ Club – some seven percent of its overall budget.

Those who receive a three-to-five-year sentence get a monthly wage of NIS 2,000. Palestinian prisoners who are married, have children, live in Jerusalem, or hold Israeli citizenship receive additional payments.

During the debate which preceded the vote, Stern said that “in the current situation, there is an incentive to engage in terror activities, and this postpones peace. Palestinians themselves have testified during interrogations that they continued to engage in terror in order to be imprisoned and receive more money. This law is meant not only to promote the safety of the citizens and residents of the State of Israel, but also to promote peace.”

The Knesset bill is similar to the Taylor Force Act, which is on its way to becoming law in the US after a nearly-two-year effort. The Act was inspired by the murder of Taylor Force, a West Point Graduate and United States Army veteran, in Tel Aviv in March of 2016.

Palestinian attackers have terrorized Israelis with stabbings, shootings, bombings and car-rammings throughout Israel, with no end in sight.